Japan is considered to be one of the most advanced and developed countries presently. The country is leading in many different industries, including automobile, electrical appliances, ships, machine tools, chemicals, etc. In that capacity, Japan is a business hub. Considering the business opportunities in the country, it is pretty beneficial to get a Japanese trademark. Through a Japanese trademark, businesses can protect their identity and create trust among the customers by building an image for themselves and protecting it legally. Regardless of the business’s size, anyone can get protection for 10 years at a low cost through a trademark!

Japan’s trademark registration process is slightly different from other countries, considering the Japanese characters. To understand, let us have a look at the complete process from start to finish.

Japan’s law protects overseas businesses and individuals; it does not differentiate between a person residing in Japan or overseas regarding the registration process and the conditions applied.

The trademark must be unique in its sound, which means that it should not have a similar sound or ambiguity in its pronunciation. English and Japanese words are easily understood, but if the words are in a different language, then it is advisable to use Japanese characters to show the words’ actual pronunciation to remove the ambiguity.

Types of trademarks in Japan

Trademarks in Japan are described categorically under the law. This includes:

To get a trademark registered, the owner must submit the application to Japan Patent Office. This application will consist of the applicant’s full name, nationality, and address.

How to register a trademark in Japan?

Before filing an application, it is always good to conduct a search to see if the trademark has already been used or is currently in use by someone else. This saves time and energy and possible rejection of the application.

Publication of the Application that is Unexamined

The application will be checked to see if all the formal and procedural requirements are met. If there are incomplete documents or some of the fields are not filled properly, an invitation to correct them will be made.

Notification of Reasons for Refusal

If these requirements are not met, a notification will be sent to the applicant in which all the reasons for refusal will be given.

If the application is refused, the applicant can give a written argument or an amendment to nullify refusal reasons.

The argument or amendment is taken into consideration, and if there are no reasons for refusal, a decision to register the trademark will be made.

Suppose the argument submitted by the applicant cannot eliminate the reasons for refusals, and the examiner deems the trademark cannot be registered, a decision of refusal will be made.

If the applicant thinks that decision for refusal is not justified, he can appeal against the decision.

Once the payment for the registration is made, the trademark is registered.

Anyone can file for opposition with the commissioner of the JPO against the decision of trademark registration.

Specific documents are not required but depending on the applicant, JPO can ask for documents to confirm nationality, corporation entity, tax returns etc. 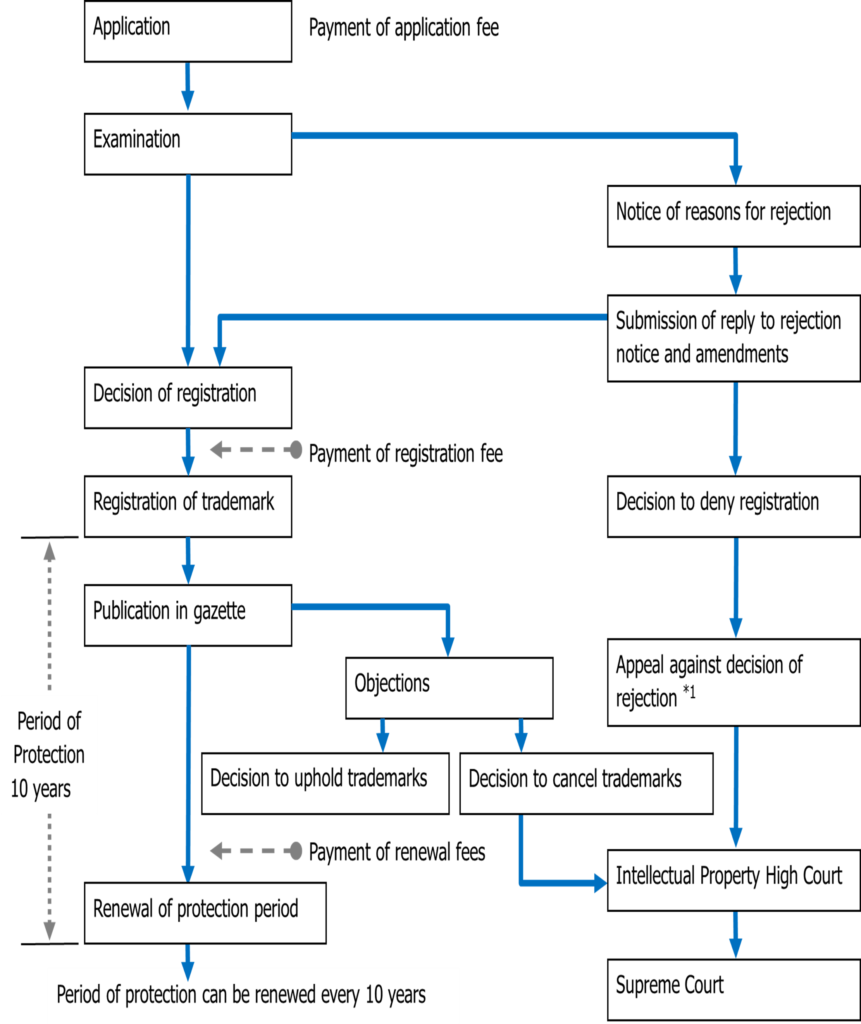 There are different fees; application and registration fees.

The application fees for a trademark in one class is ¥12,000 or around $109. If the applicant decides to get a trademark registered in multiple classes, he will pay the same amount for the first class, which is ¥12,000, and then ¥8,600 or around $78 for each additional class.

For registration, the fee is ¥28,200 or around $256 for a trademark per class. These are only the official fees and do not include an attorney’s or agent’s fees.

Other than these, if the applicant wants to renew the trademark, he will have to pay ¥38,800 or $352 per class, excluding the attorney’s fee.

How long does the Japanese trademark last?

Japanese Trademark gives protection against infringements and provides exclusive rights to distribute, in addition to many other benefits. Japan is also a member of the Madrid Protocol: a system through which a single application can get trademark registration in many member countries. Having a first-to-file process, it is advisable to get your trademark registered as soon as possible.

If these are the questions that come to your mind when thinking of registering a trademark, you have come to the right place. We, at Trademark International, answer these questions and more! Offering multiple trademark services, we guarantee client satisfaction. For expert advice and consultation, contact us now!

How do I register for a trademark?

What is the price of registering a trademark?

Just like every country has its own registration process, the cost varies as well. Depending on the legal fees and the length of the process, the cost can go up or down. In the US, the price of registering a trademark ranges from $500 to $3000.

What documents do I need to file for trademark registration?

You need to file an application which should contain: your name and address, if it’s a business then the type of legal entity it is, details of the trademark, list of goods and services, the details of the class(es).

Can I get local and international trademark both?

Yes, you can file for both: a local and an international trademark. Some countries entertain a single application to register a trademark locally as well as internationally.

Can I register my trademark in multiple countries with a simple application?

Yes. It is possible to register a trademark in multiple countries with a single application but it depends on which union the country is part of. You can do this through the Madrid Protocol or EUIPO.

What can be registered as a trademark?

Patent International have you covered!

Get latest news, updates and offers directly at your inbox. Subscribe for our newsletter today!

Your ideas are safe
Patent International, a global network of patent and trademark experts ready to hear from you.